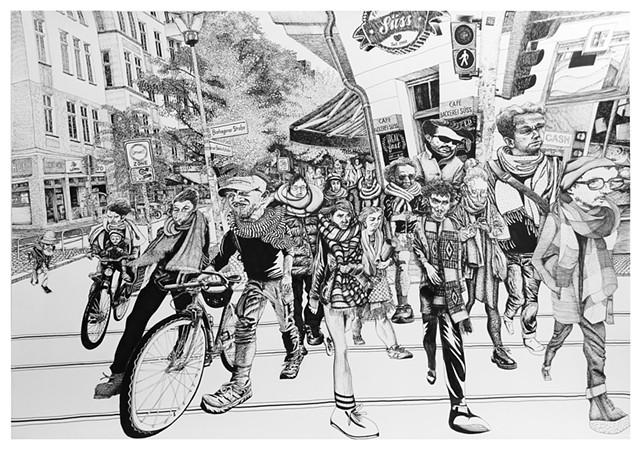 Boxhagener Straße is a busy thoroughfare spanning northwest to southeast, bisecting the southeastern quadrant of Friedrichshain below Frankfurter Allee. Formerly an East Berlin borough, now merged with the former West Berlin borough Kreuzberg to form Friedrichshain-Kreuzberg, both parts, but especially Friedrichshain, are late-comers to gentrification, retaining a grungy, counterculture vibe. Its indie boutiques and casual eateries attract an international crowd, especially near the hip and leafy Boxhagener Platz, or Boxi. Walking the streets, you are likely to hear people speaking, besides German, English, French, Russian, Spanish, Czech, and Turkish. This vibrant mix is unified by a shared commitment to wearing scarves in all types of weather, often even in the summer, accompanied by shorts and a t-shirt. No doubt, this is due to Berlin’s unpredictable weather, as well as an expression of German preparedness. Yet, for some it surely is a fashion statement. As for me, if it is colder than 12c (54f), I make sure to stuff one in my backpack, before I venture out into the streets.