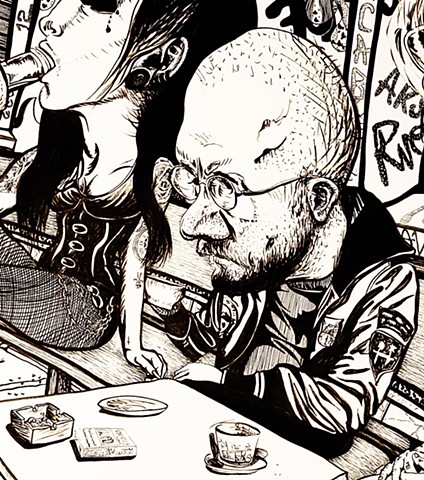 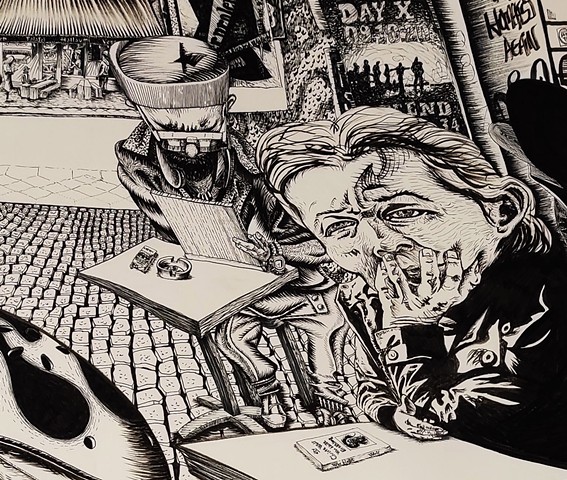 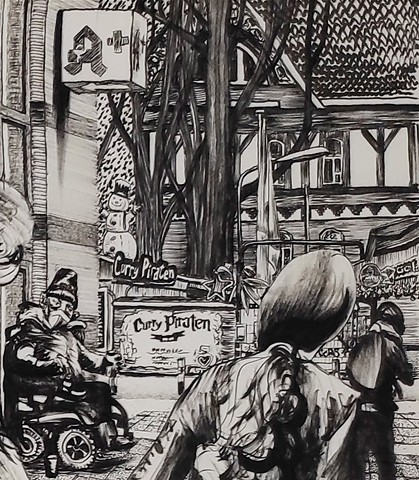 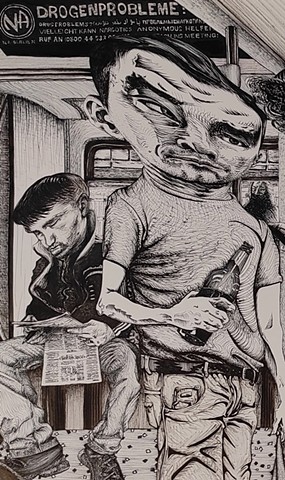 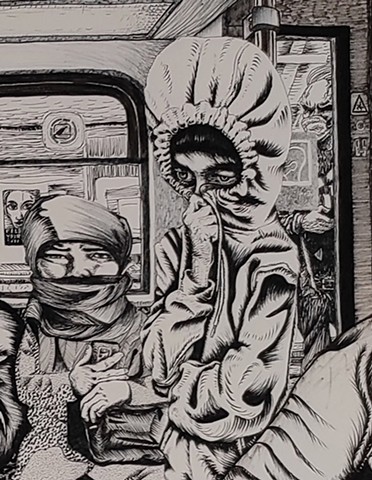 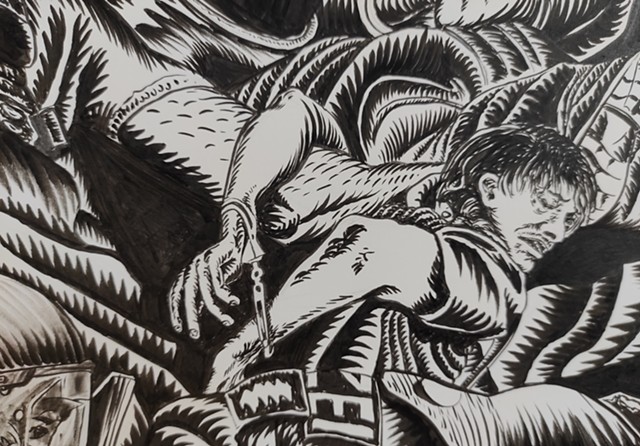 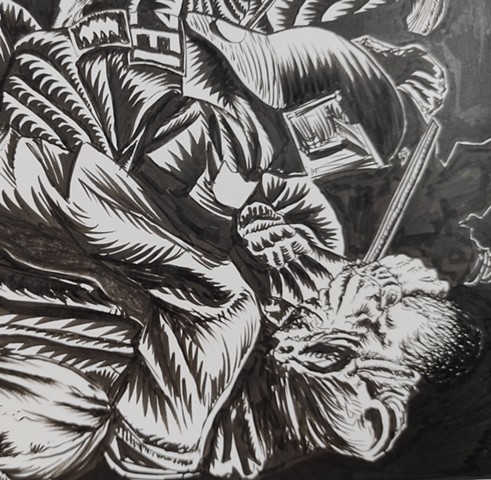 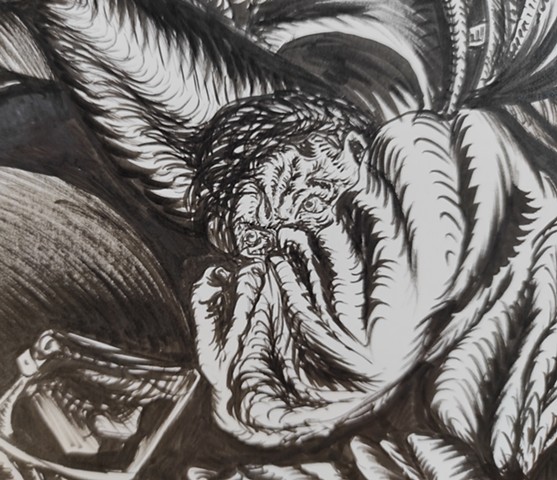 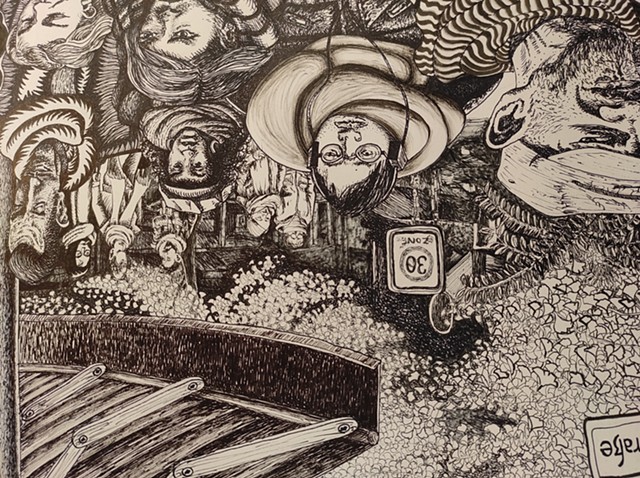 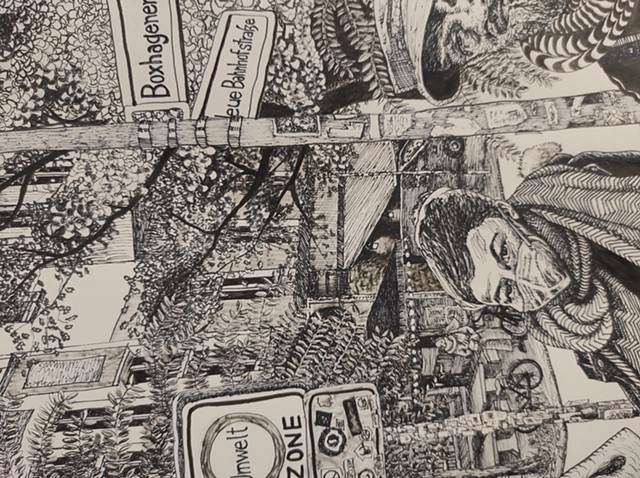 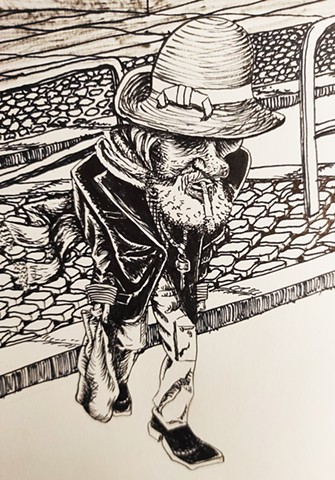 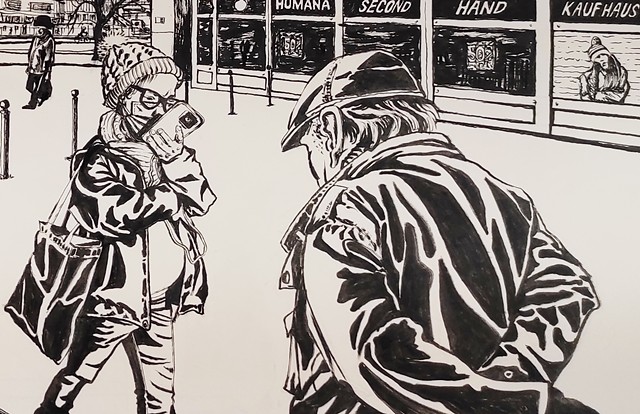 These drawings and street paintings manifest my impressions of Berlin’s spirit and its people, particularly in my neighborhood of Friedrichshain, a former East Berlin borough that has been merged with Kreuzberg, a former West Berlin borough, to form Friedrichshain-Kreuzberg. Residual traces of the city’s post-war division, between socialist GDR (DDR) and capitalist FRG (BRD, or Bundesrepublik Deutschland) between 1949 and 1990, remain visible in peoples’ facial expressions, style, and mannerisms. The relics and scars of the Cold War mark the streets and parks, walls and sidewalks, and they are imprinted in the hearts and minds of its citizens.

My son’s karate instructor was a police officer in the GDR. When I braved the question of what it was like, he said regarding East and West he has two hearts. He now has the freedom to go where he wants and say what he likes. He appreciates grocery stores with fully stocked shelves. However, he misses clean streets, and a sense of community that he lost to the …dog-eat-dog life here in the West. It saddens him that there are drunks and junkies laying around where children play.

The German government is notoriously bureaucratic and precise, and German people have a reputation for being orderly and disciplined, and yet, anything predictable and rigid can be undermined and broken. Vast areas of its largest city are covered in graffiti, littered with broken glass, defunct furniture, broken bathroom fixtures set out on the sidewalk, and dog trappings. There are never-ending construction projects, trains running late and smelling like urine and alcohol, sex shops, occupied houses, people getting drunk and high in parks and on playgrounds, and people sleeping rough.

Drawing involves editing: choosing what you want, or do not want, to see. Drawings of people have the potential to reveal their attitudes, values, and beliefs. The process of creating another’s likeness is, at the same time, one of self-exploration and self-discovery. What an artist doesn’t know about their self is discovered in what kinds of subjects they choose, and in their manner of representation. I take inspiration from artists who critique modern society through caricature, such as the Berliner Heinrich Zille and the American George Bellows, the Neue Sachlichkeit (New Objectivity) artists George Grosz, also from Berlin, and Otto Dix, as well as Village Voice illustrations from the 1980’s by such artists as Sue Coe and Joe Coleman.

An interesting combination of attributes has evolved from Germany’s past—a love for rules and procedures, yet a distain for authority and autocracy, the latter especially and going back many centuries in Berlin. Back when there was a GDR and the Wall still separated the city and all of Germany, politically aware punk rockers, mostly in the west but also in the east, raged against authority of every kind. This attitude still lingers —particularly in Friedrichshain-Kreuzberg. The police in the former east, once the safeguards of a dictatorial, centrally-planned economy charged with suppressing dissent, today are seen by many political activists as defenders of corporate corruption and crooked politicians.

The German education places a strong emphasis on learning from history, and there are reminders of the darkest chapters in their past scattered throughout the city of Berlin. There are monuments and museums, ruins and Stolpersteine (stumble stones), in memory of the Holocaust and WWII. A very thin border separates the people of Berlin and its ghosts. The Wall hasn’t entirely vanished—it has been dissolved into invisible pieces and scattered throughout Berlin. Most of our neighbors in the former east, close to Ostkreuz, rarely, and some never venture west, particularly those who grew up in the GDR, or in Eastern Europe. Unlike most Germans you meet in the west, the teachers in my son’s school speak no English. Their second language, if they still remember it, is Russian, which most claim they learned reluctantly, and forcibly, under a socialist regime. Conversely, my sister in law and her husband hailing from West-Berlin were among the first generation to live in an occupied house in the former East after the wall fell, and yet today, she and her family live back in Western Schöneberg, and come to the eastside only rarely to visit us. In this sense, east and west are in many ways parallel universes, connected by trains, cars, newcomers, tourists, and a troubled history.