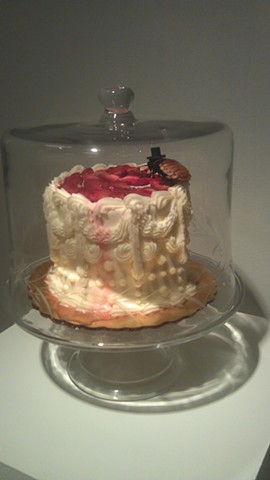 The Aristocrats joke is choleric humor. Short on wit, long on bile. Told wrong, it's merely smut. Told right, it's a vehicle to expose the submerged cousinhood between two kinds of obscenity: offenses to politeness and offenses to justice. Fucking, incest, bestiality? These things are obviously obscene in a polite society. The existence of aristocracies and the poverty, corruption, and abuse they bring with them? These things may be merely off-scene in that same society.

Casting cockroaches as the Aristocrats risks undermining the joke by revealing the punchline early. We see these disgusting creatures engaged in their disgusting pursuits already knowing who they are. Their tophat and tiara tell us they are our betters. Visual art makes this compression unavoidable; however, it also reveals other layers to the cake of the joke. It reminds us that Aristocrats are simply pursuing their appetites, as any of us do. Who wouldn't trade freedom for the opportunity to devour 100 times our weight in cake? And wouldn't doing so within the confines of a glass cake pan maybe be worth it? What do we really think when we watch royal weddings on the 10,000,000 screens of the modern world? Is it envy?